A study of a photograph I discovered this spring, of my beautiful mother, c. 1954 ~ mere weeks after my parents were married. They were living in New York City, and had gone to The Cloisters for the day. My father’s romantic spirit comes to life in the beautiful photographs he took of my mother throughout their 53 years of marriage, and in these early photographs especially. He clearly liked the photo I’ve copied here, for he placed it alone on the album page. His black and white photo though is over-exposed, such that my mother’s image is very bright. Indeed, she looks angelic.
Which, in fact, she is. 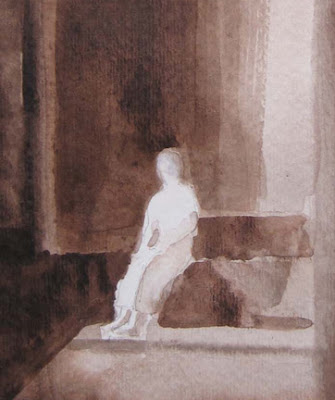