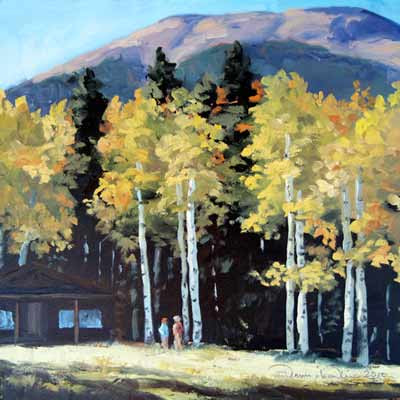 I’m nowhere near ready for summer to end, and yet I couldn’t help but paint an autumn scene today. Though I have abundant new summertime landscape photographs to choose from, I just had a strong desire to escape into this scene — one that’s been calling me since last October when I took this photo. ‘Guess I just had a hankering to carve Baldy out of the sky and dapple some sun-kissed leaves. Or maybe I just felt like communing with my friends, Jonathan and Roanne, who are pictured here conversing as they sip thermos coffee in front of the Miranda Cabin.
We had just completed our climb of Baldy Mountain (that peak looming 12,441 high in the background), and were winding down in the afternoon sunshine at Miranda. Despite gale-force winds on the saddle and summit, it was a grand hike. Weak coffee never tasted so good as it did there in the Miranda Meadow, as the late afternoon sunlight warmed our aching bodies.

It’s pretty rare that I include figures in my landscapes. Not sure really why that is. I likely avoided them early on in my painting career because they seemed too hard to pull off — the landscape alone was challenging enough. Anymore it’s largely because when I’m in the landscape, I’m often alone. But on the few occasions when I have included figures in my paintings — always hiking scenes, interestingly enough — I’ve enjoyed the challenge of adding the human element. Too, I’m appreciating more the way in which including figures alters the narrative of the scene.

Hmmm….wouldn’t be at all surprised if I start including figures in my landscapes more often.

Here’s a close-up of my friends, rendered with just a few quick brush strokes. As usual, it’s through suggestion rather than closely-rendered detail that I’m striving to describe specifics. 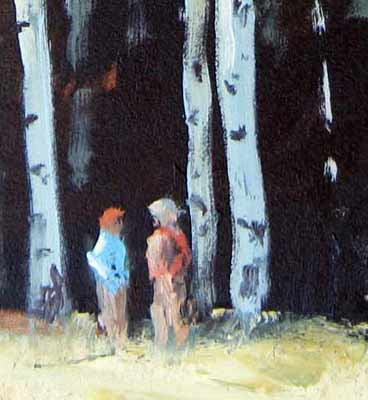 I admit that I’m very satisfied with this painting; it came together quickly. Luckily I had the benefit of a strong photograph to work from. As usual the images here on the web don’t do the color of the painting justice.