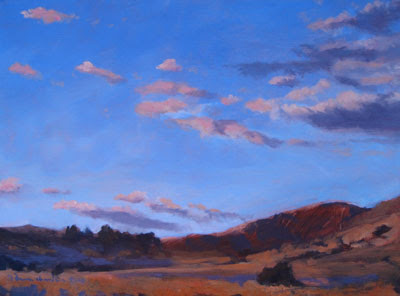 I’ve come to love the trails of the Sandia Mountains that grace Albuquerque’s eastern edge. Supposedly they are named “Sandia” — the Spanish word for “watermelon” — because, when soaked in the light of the setting sun, they take on the deep amethyst color of watermelon. More often though I find the color of Albuquerque’s evening mountains to glow hues of orange or copper.

Here is looking north from the Copper Trail, on one such fiery evening. Intriguing to me is the contrast between the hard, rugged mountains, and the delicate, soft clouds. Note the distant mountain on the right: that’s all “underpainting.” I had intended to paint over that thin wash with denser paint, but after building up the areas around it, I realized I didn’t need to cover it up. The sketchy umber underpaint described the distant craggy peak just right.
I love it when that happens.