The first of my secondary works grown out of the Odes & Offerings theme of incorporating the text of a Barbara Rockman poem.
The first thing one surely notices with this painting is the dominant figure of the nude woman, raising her hand skyward. She is a sculpture I photographed some years ago. Behind her the picture plain is divided between light and dark (day and night?), with a warm, arid, mountainous landscape suggested on the left and a dark, nebulous passage on the right, out of which emerges a ghostly figure of a woman. Fading in and out of perception are fragments of Barbara Rockman’s poem* among them I am a plain woman…..I mix paint….with these hands….
On the left are smaller barely discernible fragments of a different text: for joy….and omnipotent reign…comfort

In the lower left, a faint golden nest with two sky blue eggs; below that, un chuchotement ~ “a whisper,” in French in my father’s handwriting, lifted from one of his hundreds of french flash cards. My father’s handwriting appears in a second place in this work — In the upper left, a fragment of a wine bottle label from his cellar, with the date  the vintage went into his cellar written vertically along the left side.

By themselves, these fragments have no meaning to one another. But parsed together, they begin to suggest a relationship, a story… 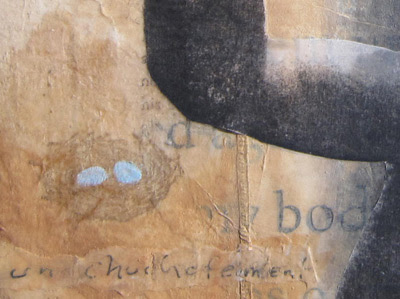 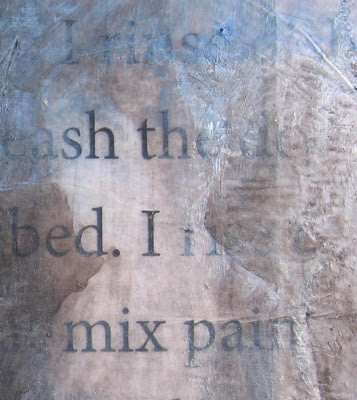 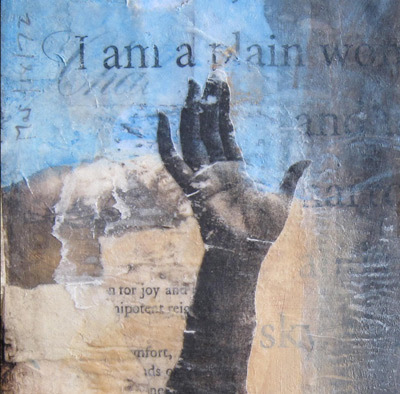 *Letter from Georgia O’Keeffe To Alfred Stieglitz Upon Seeing His Photograph of Her Hands, by Barbara Rockman