from my New Year card…

On this cold and snowy winter’s night, I find myself thinking of my father….
He had an insatiable passion for knowledge. His whole life he devoted to, among other things, the pursuit of intellectual enrichment. My uncle — my father’s brother-in-law — said of my father, “he was the most interesting person I ever knew. He knew something about everything.” Indeed, rather than a ‘jack of all trades and master of none’ my father seemed to be a master of just about everything he had an interest in — and that was a lot. One need only peruse the vast libraries of books lining the walls of our home for evidence of my father’s rich and varied interests.
Coupled with his passionate intellectual rigor, my father possessed an unequaled joi de vivre, embracing life with all the energy and enthusiasm he could muster. Walking quickly, muttering to himself snippets of something or another that he was trying to memorize, not a moment could be wasted in his pursuit of knowledge. His “golden years” he welcomed as an opportunity to learn and do yet more. Little wonder then that upon his retirement from pathology at the age of 70, he dedicated much of his attention to learning French. Not a room in his apartment was without identification labels taped to everything: un tire-bouchon
(a cork-screw), les ciseaux (the scissors), la lampe (the lamp). He insisted on wearing shirts with two breast pockets, so that throughout the day as he went through his latest French flashcards, he could easily divide the cards between the two pockets: on his right, the words and phrases he got correct; on the left, those yet to learn.
My father died this year, and the ache in my heart left by his death echoes with an emptiness and longing that I can hardly describe.

In early February, when I went to clean out my father’s apartment, despite the staggering sadness of the work, I made many happy discoveries. Among them his hundreds of French flash cards, his unique handwriting scrawled bilingually on either side. Invariably written with a very fine tipped blue ballpoint pen, what these small notes reveal is not just a passion for his favorite of the Romance languages, but little gems of his personality, including his signature delightful naughtiness and good humor:

Il m’est pénible d’avoir à vous dire que le vin est fini.   ~   It is painful to me to have to tell you that the wine is finished.

J’ai un engoutment pour le chocolat.   ~   I have an infatuation for chocolate.

C’était amusant de marcher dans les flaques d’eau.   ~   It was fun to walk in the puddles.

Quoiqu’il soit vieux, il a agilité d’un jeune homme.   ~   Although he is old, he has the agility of a young man.

My father’s flashcards now sit in an open box in my studio.
When I created the recent painting pictured here on my New Year card, the painting seemed to evolve on its own. But once finished, I couldn’t think of a title for it. I debated several, but they were unsatisfactory. For weeks I sought a name.

Then one day, I chanced to pick up one of my father’s flashcards:

elle est sensible au froid  ~  she is sensitive to the cold.

Eh, Voilà! I found my title!

If you look very carefully, you’ll find these very words written in my father’s handwriting near the top of the painting. 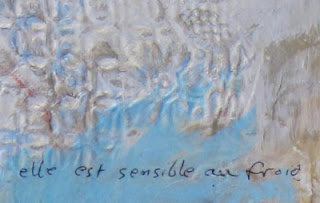 Thus begins a new artistic collaboration between my father and me.
I’m delighted by the concept!
I hope he would be, too.

If you’re curious to see more of our collaborations, you’re welcome to
keep tabs here on my blog   or here, on my website.

There’s just three of our collaborations completed just yet.
But there will be more.
Many more.

Oh, and my sainted mother? Her spirit’s joining in on the collaboration, too:
That star in the painting is a pendant of hers. 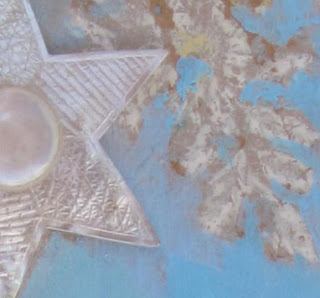 Joy to you in the New Year! May we all live life as fully and with as much joi de vivre as did my Dad. 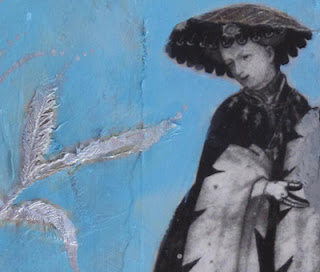 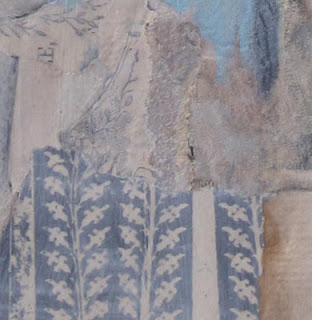 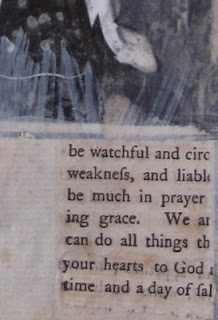