my walk across vermont

On September 9 of this year I set out to walk across Vermont. My passageway was The Long Trail, the oldest established long-distance hiking trail in the United States. Begun in 1910—two decades before the Appalachian Trail—it courses for 273 miles along the spine of Vermont’s Green Mountains from Massachusetts to Canada.

My desire in walking 270+ miles across Vermont was to unplug from the mechanized world; to withdraw from the crazed speed of 21st-century life and slow down to a 19th-century kind of pace. I wanted to experience the woods again—the forests of my childhood, filled with eastern hardwoods. I wanted to see, smell and walk among red and sugar maples, beech and birch, hickory and oak trees….

I wanted to see green again—the vivid, verdant real green of ferns and moss and deciduous leaves. And I wanted to see those leaves fall, in blazing festoons of shimmering red and orange, gold and bronze. taught me to love forested trails and mountains. And I just knew they would be there, in the coral glow of peeled paper birches, in the tender shoots of fiddleheads and clover, in the gold-brown sawtoothed edges of crackling beech leaves. I wanted to feel my parents close, and knew the New England hardwoods would bring them to me. And I to them.
And maybe most of all, I wanted to find myself there. I wanted to test my mettle. See if I could do it. See if I was still the skilled woodswoman I once used to be.
For back in my teens and early college years, I was quite the backpacker, having taught backpacking skills for many summers. But those days were long ago. And the truth is, I’d never been backpacking alone. Despite all of my experience hiking trails, I’d never spent a night alone in the woods.

Some months before my trip, one of my brothers asked me if I was going to do an overnight test hike.
No.
I did not want to get out there and find I didn’t like being alone in the woods. I’d rather leap into this big thing full on, and, if I found I didn’t like being alone in the woods, then just buck up, deal with it, and walk my way through it. I didn’t want to take a chance of backing out before even trying.

My dream for this journey came to me the summer of 1991. Entering my second year of grad school at the University of Pennsylvania, I spent that summer living with my aunt on Mount Desert Island in Maine, where I worked in an art gallery. There I met artist Rebecca Cuming. She, like me, had a passion for the outdoors. But her passion was exceptional: Sometime in the 1980s she had hiked the Appalachian Trail. The whole thing. Solo. I was (and remain) in awe of that achievement. I wondered if I could hike the AT…. 2000+ miles and six months? Wow. That’s a  h e l l  of a commitment. Barely conceivable. I expressed my wonder… and my doubts.

Hike the Long Trail, she offered. You can do it in a month.

I’d never even heard of the Long Trail—didn’t know it overlaps with the Appalachian Trail for 100 miles through southern Vermont, before the AT branches eastward to New Hampshire and Maine.

Intrigued, I went out and bought a small, green-covered publication, Guide Book of the Long Trail.

I don’t know if I ever even opened the book, but it traveled with me as I moved my life across the country from Philadelphia to New Mexico and carved a living for myself in the dusty mesas of the Southwest. to the back, a fur of dust and cobwebs growing over it.
Then six or seven years ago as I purged possessions in preparing to move from Taos to Santa Fe, I found it again, and realized it was now more than two decades out-of-date.
I flipped through it, scanning the pages.

So much for that dream.

I tossed it in the wood stove, and the dream turned to ash.

A couple more years dissolved away, and one winter morning I found myself in a cafe in Taos, pondering tea leaves and the fact that my 40s were slipping by with the crest of a half-century of life burning like a question-mark on my calendar and psyche. I wanted to do something—something big—to mark my 50th year. Burning in me, too, along with that calendar mark was the memory of a wistful comment my father made sometime in the last years of his life:

None of you kids is into backpacking anymore. I find that a little sad.

And I remembered my ashen dream of hiking The Long Trail. 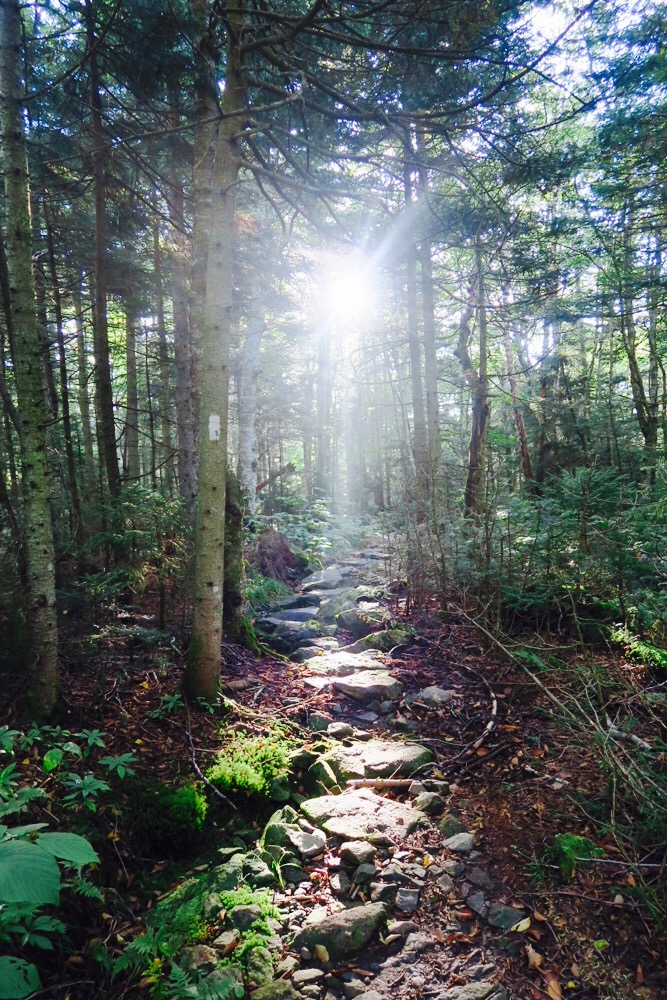 Read the next installments about my journey:

Installment o2: where a walk across vermont begins

Installment 03: where a walk across vermont ends

Installment 04: falling, gratitude, and why I want to return to the trail