the tide of awareness on the longest day of the year 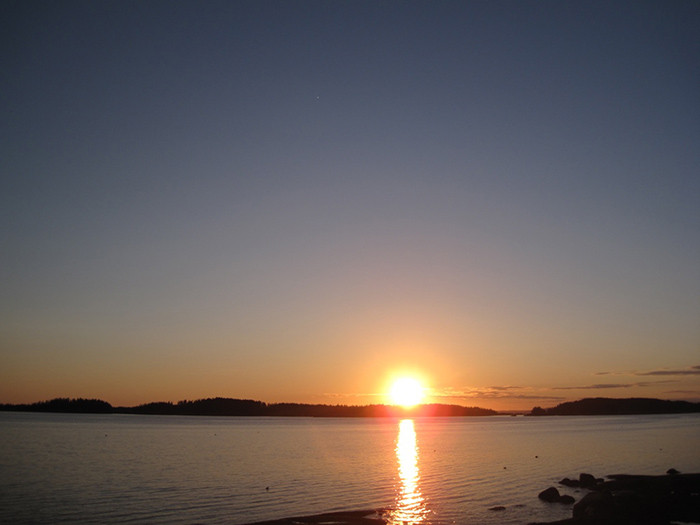 As a child I always loved the summer solstice, because it meant the days were now getting longer.

Think about that for a moment.
If you are a human being with any awareness at all of our planet, and you were paying attention to that first statement, then you’re thinking to yourself, “Wait… that’s not right….. The days begin to get shorter with the summer solstice — not longer!“

And you are correct.
But I didn’t know that Truth — didn’t grasp it — until I was nearly 30 years old.

When I was a kid, school ended and summer started on the summer solstice — my mother’s birthday. She always said she was “born on the longest day of the year,” and sure enough on that day, it just seemed like the days suddenly swung open in length and excitement and possibility.
From June 21st onward the days would stretch well past dinnertime, and evening would fold in with fireflies and the cooling of the grass in long lawn shadows.

For us kids, summertime meant exploring in the woods, building forts, softball games, and antics in the tree house. Of countless hours in the pool — even in the evenings as bats skitted the surface of the water. Of the 4-H Fair and funnel cake, fresh garden corn and coleslaw. Of road-trips north through New England to see distant relatives. Of camping trips on the coast of Maine and lobster and popovers and strawberry pie; of digging for clams and blue-green water-carved sea glass.

As a kid, the days of summer seemed expansive and endless and joyful.

Our esteemed writer (the ruby-robed princess on the left) partaking in a bit of summertime frolicking with her BFF, c. 1969.

It was only as September approached, when my little desk in my little room attained a stack of pristine new notebooks and sharpened pencils that I had the slightest sense of daylight lessening.

This was my experience of summer for most of the first three decades of my life.

And then in June of my 27th year, I was jolted into clarifying awareness of the Truth of summer solstice.

That summer I was living with my aunt on Mt Desert Island in Maine. I was a graduate student in painting in Philadelphia and had gone to Maine for the summer to work in an art gallery on the island. My aunt — a widow, her children long grown with families of their own — lived alone, and graciously took me in as her roommate that summer. She offered me an antique- and book-filled bedroom, and the freedom to do be on my own schedule and do as I wished.

Backdoor to the Kitchen ~ oil on canvas ~ 18″ x 12″
Walk through that door and you entered a musty shed which led to the kitchen of my aunt’s 19th-century farmhouse near Salisbury Cove on Mt. Desert Island, Maine. My friends and neighbors have been alerted: If my house is ever on fire, grab three things:
1) My dog.
2) My computer.
3) This painting.

This was to be my first time visiting her since I was a child. In my youth my family would spend a week camping on her property — an absolutely idyllic spot a quarter of a mile through the woods behind her house that opened up to a clearing overlooking Frenchman’s Bay. It remains the most perfect campsite I’ve ever known. Flat, grassy, with dappled sunlight, plenty of firewood, and immense gently sloping rocks that slanted down to the water — it was a camper’s dream.

The view across Frenchman’s Bay from our camping site on Anne’s point. All of these watercolors are from the large journal I kept that summer of 1991 living on Mt Desert with my aunt. Unfortunately the paper of the journal wasn’t ideal for watercolors, but I delighted in painting in it none the less — especially trying to capture the various treasures I’d collect during walks at low tide.

The day after I arrived that summer of graduate school, I hiked through the woods to the point, and set up my family’s old canvas tent, amazed by how small it seemed now that I was an adult. Over the course of that summer I would spend many a day down there walking the shore, filling my pockets with treasure, and nights writing and painting in my journal by flashlight, soon lulled to sleep by the sound of the tides.

The tides were fascinating to me. For, other than my family’s annual excursion to this spot, I had had little exposure to the ocean — despite growing up in New Jersey, just a hour from “the shore.” While my friends would spend their summers and weekends “down the shore” we always went to the mountains to hike and camp. My father’s attitude was that if we were going to go to the ocean, then by God, we were going to camp! And so we did — here, “down east” on my aunt’s coastline.

Now though I became intrigued by the relationship between the moon and the tides and the remarkable schedule of high and low water. Soon I learned that if you knew the time of the day’s tides, you could pretty much determine the time of tomorrow’s tides; that high tide and low tide were about 6 hours or so apart. That was just amazing — the clockwork of it!

But if ever you lost track of the time of the tides, there was always the annually updated tide chart — an accordian-folded pamphlet printed on thin, durable paper, with a series of minuscule tables mapping out with precision the time of each day’s high and low tides, as well as the exact time of sunrise and sunset. In my aunt’s house the tide chart was tacked near the old cook-stove in the kitchen.

That year June 21st — the summer solstice — was on a Friday, and I was looking forward to celebrating the kick-off of summer at a party with new friends down on the southern tip of the island. After the party, I was planning on sleeping in my coastal tent.
Anticipating a late evening, I went to the corner of the kitchen to study the tide chart and see what time the sun would be setting that evening.
My eyes scanned the numbers, noting that on the Solstice the sun would be setting about one minute later than on the previous day.

But afterwards, within a day or two the sun would be setting one minute earlier again. And the day after that, another minute earlier.

I looked hard at the chart, my finger running down the column for sunset. Each day after the 21st, sunset was a minute earlier.

By July 4th, evening would be a whole quarter-of-an-hour earlier than on my mother’s birthday!

I scanned the column for sunrise. Each day after the 21st, dawn would occur one minute later than the previous day.

As I stood there in the kitchen a wave of embarrassment overtook me I realized the depth of my ignorance.

Sadness at the realization that already the cold dark days of winter were on their way.
I felt crestfallen that Mother Nature had let me down. She was supposed to be protracting summer evenings till September. Surely that was the promise she made to me as a kid, when school let out on the first day of summer, wasn’t it?

That evening of the longest day of the year was winged with melancholy for me.

That was three decades ago, and while I no longer feel melancholy at the summer solstice, I feel, perhaps, a little wistful for those carefree days of youthful summers, no matter they were enjoyed in a daze of ignorance.

Mostly, though, I feel fortunate that I get to witness yet another cycle of these beautiful earthly seasons.

And gratitude. Gratitude that I get to perform a personal solstice ritual that holds meaning for me.

For June 21st remains the day my mother was born — some eight decades ago. And though she died of breast cancer 12 years ago, thoughts of her flood my memory constantly, and on this day especially.

Back when she was struggling to fight her cancer and was in the brutal cycle of harsh chemo treatments, she confided to me:

I’d give anything for a strong cup of black coffee and a glazed donut.

To this day I kick myself for not finding a way to smuggle coffee and donuts to her room, doctor’s orders be damned.

But in my way I try to make up for it.

For every year on her birthday — on the longest day of the year, on the summer solstice — I raise a steaming cup of strong black coffee and a glistening glazed donut to the sun. And on my mother’s behalf…

I savor every sweet, pillowy morsel…

I savor every minute and moment of light.

Teeth marks that perfectly align with the upper jaw of a certain 13-year old mutt….

Thank you for being here and reading my musings.

If you enjoy my blog posts and know others who might enjoy them too, please feel free to share this.

Meanwhile, find more of my stories, insights and art here on my website, www.taosdawn.com. Peruse and shop for my art here. And please consider joining me for Tuesday Dawnings, my weekly deep breath of uplift, insight, contemplation & creativity.