Whoop-yeah! Second attempt at this view of the coast of Vinalhaven Island and I am pleased!

This new one just seems to capture more of the warmth of the late afternoon sun glaring across the rocks and evergreens. Too, I think I differentiated better the variation in color of the tidal-washed granite. But Gorry! (as my sainted Yankee grandfather would say) it was a real challenge trying to get the color and value (shade/brightness) just right on those brightest rocks. I must’ve scraped off and repainted that area half a dozen times. Alas, my photo here doesn’t do it justice.

Here’s a comparison of the two paintings. The most recent painting is on the bottom.

Okay, so maybe it’s a toss up. Now that I look at them both together I’m having a tough time choosing a favorite. The shapes of the trees on the first painting (top) are a bit more interesting, as are the shapes of the clouds. But the colors overall — especially of the rocks and trees — on the bottom painting are more true to my photo and memory. [Note to Self: Go for the charm of a third try?]

Incidentally, some of those rocks that look so rectangular and shaped by humans are just that: shaped by quarry workers and stone-cutters. For back-in- the-day (19th century), Vinalhaven was a mecca of architectural granite. Maybe you’ve seen this building? 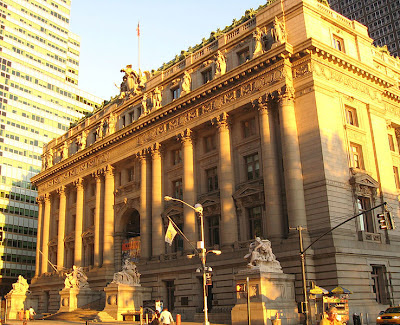 That’s the US Customs house in NYC, and much of that beautiful stone came from this very island.

Or this gorgeous interior?

That’s New York’s Cathedral of St. John the Divine — the largest cathedral in the world! (it’s also known as “St. John the Unfinished,” as it’s still under construction after more than 100 years…!) Those four glorious columns are Vinalhaven granite. There are eight of those colossal columns, each fifty-feet long and 130 tons. Imagine what it must have taken to get them off the island and down to New York.


Dying to see the exterior? Me, too. Here’s the outside:

Buildings just aren’t made in this grand style with granite anymore, so nearly all of the quarries on Vinalhaven have shut down. Lobstering is the main source of employ for the island now. The island though remains riddled with scores of quarries, now abandoned and filled with ground water. I’m told the waters are quite fine…Indeed, I have made a vow to myself that I will return again to Vinalhaven, if only to “take the waters” and skinny-dip in the quarry pools. And then I’ll walk again along these shores in the early evening glow with my friends….

Some details of painting #2: 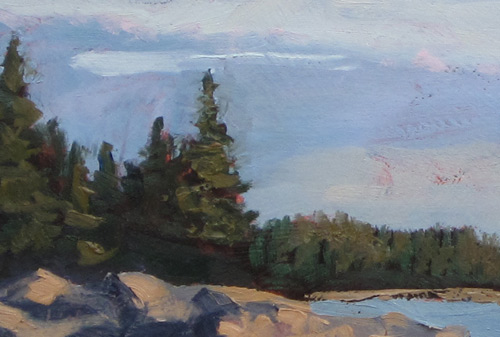