The first of four very recent paintings of Philmont’s Cathedral Rock and reservoir. (Check back! The other three will be posted here over the course of this week!) Special thanks to Greg Palmer who’s lovely photo of Cathedral Rock provided the inspiration for this painting.

As mentioned in an earlier post this spring, I’ve been commissioned to create a painting for the cover of the next Philmont Staff Association publication: The Life and Times of Jack Rhea, director of Philmont’s camping department from 1954 – 1962, and edited and co-written by Bill Cass.

In his research for the book, Bill learned that Cathedral Rock and the reservoir was Mr. Rhea’s favorite view on the Ranch, hence the request for a painting of this view. Much like the way my Baldy painting was used for the cover of the PSA/Cass book on Joe Davis, Carry On, one of my Cathedral Rock paintings will grace the cover of this new book on Jack Rhea.

My first attempt this spring at painting this scene was frustrating, as I discussed in some detail in that earlier post. Mainly I felt that that painting fell flat, due almost entirely to a lack of contrast in the lights and the darks.

This attempt is vastly more satisfying! There’s a much better differentiation between light and shadow, such that there’s a real sense of the time of day. It’s funny though, this painting style feels a little “chunky”. What do I mean by that? I’m not even sure…But there’s something about the paint handling that’s a bit unusual for me. It almost feels like a woodblock print rather than an oil painting. Maybe that’s from the halation of warm under-painting emerging around the edges of most of the shapes? Hmm… Not sure.

This scene is pretty lush. In fact, truth be told it really kind of feels more like the Pacific Northwest than the arid Southwest…! Oh well. Sometimes, when the rain gods are smiling, Northern New Mexico and Philmont’s Central Country really are this lush; it’s a blessing when they are. 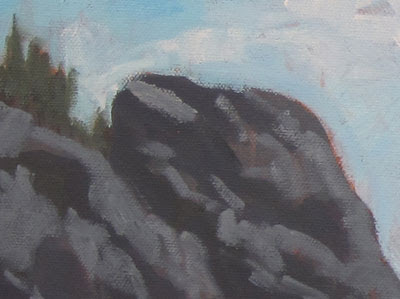 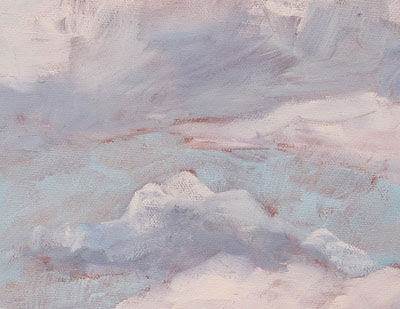 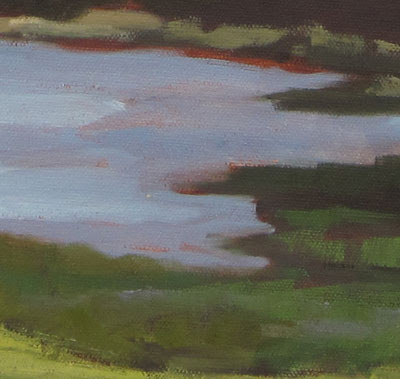