Snow. Been hoping for more of it. Maybe posting this painting will tease some out of the sky.

This is my winter card painting for 2012/13. Each winter around the holidays I create a winter-themed mixed media painting. Creating the painting motivates me to focus on the beauty of winter, a season I often find hard to get enthused about. But making my annual winter painting makes me smile a bit about winter.

When the painting is completed, I put it on a card, which I mail to my circle of family and friends and patrons. Call it a Christmas card; call it a New Year card; call it a Merry Winter card. Regardless, making the card provides an annual opportunity to reach out and connect with my tribe in a special way, particularly since scant few of us send or receive real mail anymore. (I pride myself on still being an old-fashioned letter-writer.)

This year’s card began to evolve shortly after Thanksgiving. It grew out of a black and white photo of a path through snowy winter woods that my father or mother took back in the 1950s; I found it in an album from the first few years of their marriage.
With a copier, I enlarged the photo and then glued it down on the panel.

Near the top I added pieces of old crumbling wallpaper to form a sort of archway.
With a paper doily and white paint I stenciled the “snowflakes.”

An English postage stamp is the source of the red bird, with a couple of random brush-strokes of red here and there suggesting his companions. 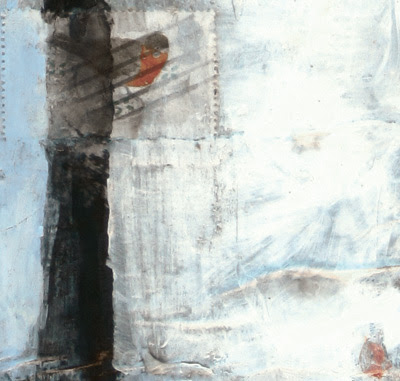 The hand-written text in the upper right is a scribbling of words I’d jotted down at some point and has since been kicking around my studio.
The printed words on the lower right are excerpted from a memoir or sorts of my parents.
The writing at the threshold of the path lends the title of the painting: “ou tend ce chemin?” — where does that road lead? It‘s my father’s handwriting, from one of his hundreds of French flashcards that he used to carry around.

It may be hard to see, but in the center of the trees is a ghosted figure of an angel — a Renaissance sculpture that I photographed in Rome. 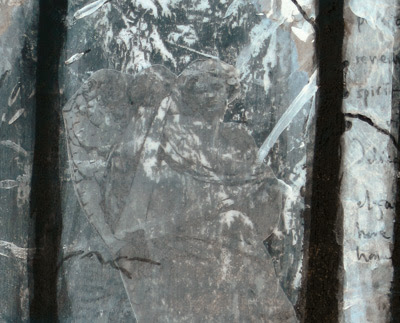 Eventually I added the tall dark tree trunks to the foreground, emphasizing the feeling of emerging onto the path.

I thought the painting nearly complete the morning of December 15.

…and then came the news of the horror in Newtown, Connecticut.

What can you say about that. Words and paint seem so feeble.

If you look along the long edges, you’ll find leaves. 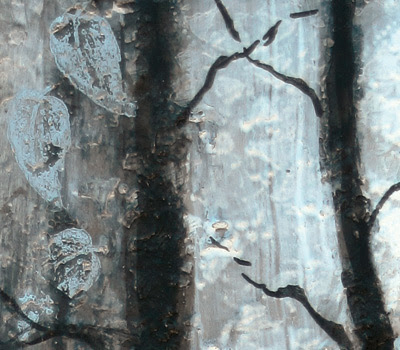