some unsolicited advice from me to you Forgive me, but I’m going to give you some advice.

Well okay — it’s stronger than that: I’m going to tell you what to do. I’m going to implore you. Entreat you. BESEECH YOU to do this, now:

If you simply can’t get there now, then get it on your calendar and get there NEXT year. In March. You’ve got to go in March, in the first days of Spring. If you wait much longer, you’ll be too late.

Go there — go to Nebraska:

Make your way to the Platte River, near Kearney.

Get there before sunrise. Or sunset. Stand, facing the water, and wait.

Be quiet. Be still.

Prepare
to have a small Grinch part of your heart that’s been shut down for months, maybe even years, open up and expand as it takes flight
with 100,000 pairs of wings. Prepare to feel your heart made huge. Prepare
to go to Nebraska

Because what’s waiting for you in the middle of the Great Plains is this: The annual spring migration of sandhill cranes. Thousands upon thousands of sandhill cranes. Half-a-million. That’s one elegant winged being for every person living in Albuquerque. Or Sacremento. Or Tucson. Or Atlanta. For a span of about three weeks in March 80% of the world’s crane population — 80%!! — fills the Nebraska sky in elongated clouds of grey stitchery. Come evening, they seek the river — shallow water,  just 6” deep — to roost for the night. For unlike herons, they can’t roost in trees. They must have shallow water.**

Come daybreak, they begin to stir, and soon rise in magnificent flocks, as they spread out to the surrounding fields, to fill their half-million small bellies with grain, grubs, insects and seeds. They are here to rest and refuel, having departed their southern wintering grounds some weeks earlier. Soon they will continue on their journey. By the time they reach their nesting grounds far, far north in the extreme reaches of Canada, Alaska and Siberia, they will have traveled some 4,000 miles.

Can you or I really even fathom that? That distance? That effort? 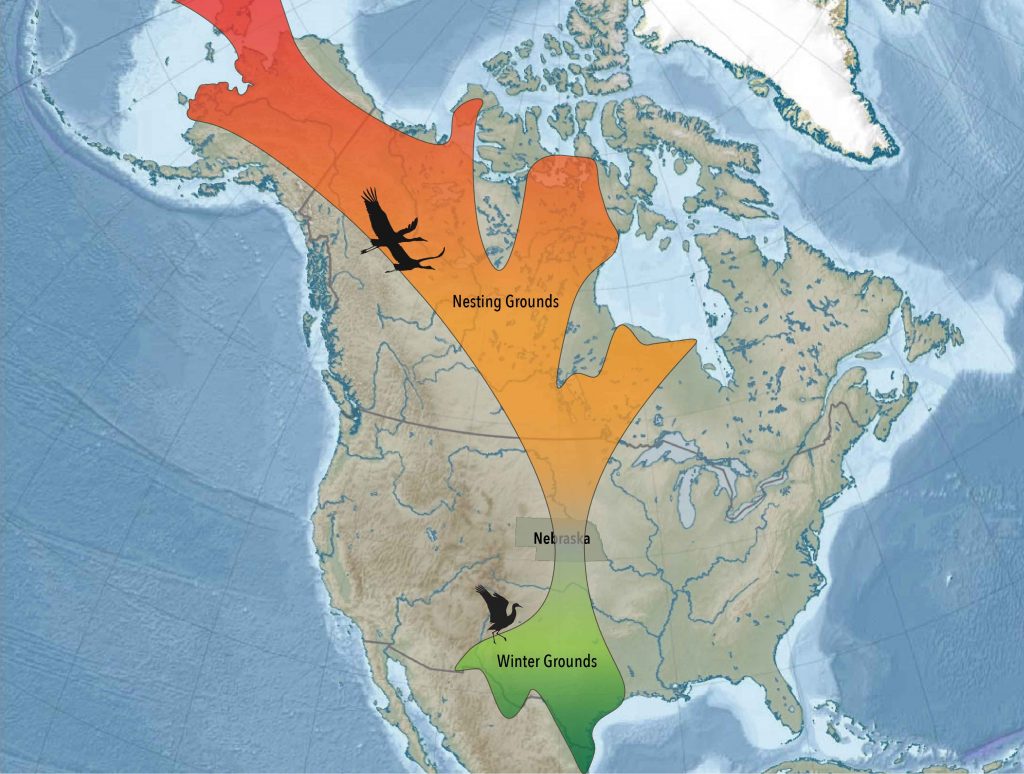 One of the things that surprises me most about the cranes is the fact that I never even knew about them til last year.  Here I am an avid outdoorswoman, who prides herself on knowing a thing or two about Nature and the environment. Who likes to think she has an awareness of and is attuned to the seasons and creatures of the wilds a bit more than most people. Yet as I’ve written before, I don’t think the cranes were ever even on my radar till about a year ago. Though I’d seen cranes before, I had never really seen cranes before. And I certainly had no idea that one of the greatest, most epic natural migrations of the world occurs right here, just a day’s drive from where I live.

How did I miss this for so long?

I guess it’s because, as with so many things, we don’t see the cranes until we’re ready to see them.

The cranes can’t find us until we’re ready to be found by them, ready to have our hearts enlarged and lifted by their cooing trill, their black-tipped wings, their perfect awkward elegance.

I’m just grateful I was finally ready to be found by them. All the photographs pictured here were taken by Dawn Chandler in the first week of Spring 2017 in and around the Iain Nicholson Audubon Center at Rowe Sanctuary, near Kearney, Nebraska.

**The Platte River has diminished considerably in the last few decades, due to modern demands. “Since the mid-20th century, this river has shrunk significantly. This reduction in size is attributed in part to its waters being used for irrigation, and to a much greater extent to the waters diverted and used by the growing population of Colorado, which has outstripped the ability of its groundwater to sustain them.”

← revealing the open pages of my wallet back to the high meadows of new mexico . . . . →